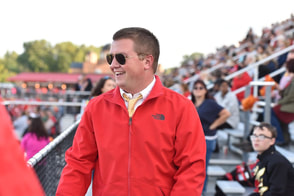 Director of Bands- Adam Cable
Adam Cable is a graduate of Central Michigan University, and received his Masters degree from Bowling Green State University. Adam was highly involved on campus, and was able to experience a plethora of opportunities. In the School of Music, Adam was the Rookie Leader and Featured soloist for the Marching Chips, while participating in various concert bands, ensembles, and jazz studies. Following Adam’s time at CMU, he had the privilege of student teaching at Troy High School under the mentorship of Brian Nutting. Though wearing colt attire was difficult for Adam, he credits the students, parents, and staff at THS for developing a level of creativity that he now carries with him.
Immediately following graduation, Mr. Cable taught six months at Marine City Middle School as their interim band director, and as a general music teacher for Holy Cross Catholic School and Eddy Elementary. With the help of Steve Fox, they lead a 7th and an 8th grade band to first division ratings at district band festival, and worked closely with the booster organization to create social events for the students. Following his temporary position in Marine City, Adam was awarded the director of bands position for Clare Public Schools in 2015. As the director for grades 6-12, Adam was exposed to an incredible amount of experiences that developed a musical passion for his students. His students had a 45-minute Skype conversation with Ray Dalton from Macklemore, and his pep band was invited to perform at a CMU basketball game when the CMU band had a conflict. In just one year, Adam was able to raise his beginning band numbers by 47%, earned the Best Communities for Music Education award by NAMM for the first time in district history, and was presented with a key to the City of Clare.
Since arriving to Athens in August of 2016, Mr. Cable has created many new experiences for his students. The marching band has grown from 89 members to 140, the jazz ensemble has performed at Cliff Bells, Aretha’s Jazz Cafe the CMU Jazz Festival, and alongside the CMU Jazz Lab 1, pep bands have performed at the Palace of Auburn Hills and Little Caesars Arena, the drum line has performed at the Detroit Auto Show, and the bands have taken trips to New York City, Mr. Pleasant, Indianapolis, Chicago, New Orleans, Grand Rapids, and Disney World. In addition, five students have been awarded All-State honors, and four students were recognized with the Michigan Youth Arts Festival. He believes strongly in community building within the band program, and strives to make the band bigger and better each year by seeking memorable performance opportunities for students, and performing advanced literature.
Mr. Cable was raised in a family of musicians, and his family is a large part of his life. He lives in Royal Oak with his wife Katie, who is a kindergarten teacher in Troy, and together they enjoy golfing, attending concerts/sporting events, in addition to spending time in Traverse City to unwind.
Email Mr. Cable 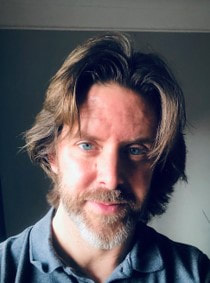 Mr. Jeff Krum is the Athens Assistant Band Director. He has 15 years experience as a band director, as is currently a part-time band director in Birmingham Public Schools. As a percussionist, he holds a Bachelor's degree from Michigan State University and a Masters degree from VanderCook College of Music. He enjoys sailing, hiking, reading, cooking, and spending time with his kids Ellorie (11) and Simon (8).
​
EMAIL MR. KRUM